At the “bar”: Il caffé -The many forms (and tastes) of coffee in Italy 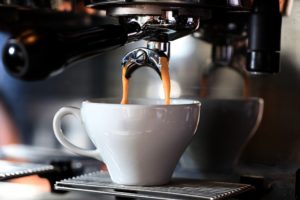 Prendiamo un caffè? Shall we have a coffee?

Coffee in Italy serves many purposes. Some folks, like people everywhere, need it to wake up. For others it is simply a habit. For some it is almost a drug and people who are hooked on caffeine, myself included, seem to need several a day to keep going. But in Italy coffee also preforms an important social function, that of an icebreaker, of a thank you token when someone who has helped you out won’t accept anything more, or simply as a way of touching base with friends and neighbors.

Of course, this is not unique to Italy. Vienna’s coffee houses are world famous, and coffee is also a way of life in many parts of the Near and Middle East where it is said to have come from way back then. If you look on the internet, various articles will tell you it arrived in Venice from Turkey in the 1600s and the association was so strong that – legend has it – it was considered a Muslim beverage until a long-ago Pope tried it and gave it his blessing.

The first Italian coffee bar or café, according to some, reportedly dates back to Venice in 1683. Other writings speak of an herbalist doctor named Prospero Alfino who returned from Turkey in 1615 and touted the bitter, chicory-like brew for its supposed medicinal qualities. Whatever. The fact is that coffee industry print-outs say that today there are 150,000 cafes in Italy each of which everyday serves 175 cups of just plain old espresso. That’s an astronomical number of cups of coffee for a country of 60 million people.

Indeed, the classic Italian coffee, or caffé, of course, is the espresso.  But if you keep your eyes and ears open you will soon realize that coffee comes in a huge variety of shapes and forms. It will be interesting to see if the arrival in Italy of Starbucks with its (for me) weird coffee concoctions (so far there is only one Starbucks, in Milan, but others are planned) will change Italian habits in any significant way. Personally, I doubt it.  In the meantime, there is no lack of home-grown variety.

Espresso can be ristretto (less water, hence stronger coffee),  ristrettissimo (even less water and therefore even stronger coffee and a smaller amount of coffee in the cup), lungo (more water, thus somewhat weaker but more content),  and americano  which is with lots more water and comes in a cappuccino size cup. Then there is the macchiato which can be macchiato caldo (espresso with a splash of hot milk added) or macchiato freddo where the milk added is cold. Of course, there is also espresso decaf , which is often called “Hag” because that was once Italy’s best-known brand of decaf coffee. (And naturally you can also get any other form of coffee in its decaf or decaffeinato version. Just as you can get most of these done with orzo (barley) if for some reason you don’t like coffee but want to join in the fun.)

Ma non finisce qui. Some people (usually blue collar workers) want their coffee corretto, that is spiked with something alcoholic, like grappa or San Buca or brandy etc. etc. Others want it al vetro, in a small shot glass rather than in the classic demitasse cup. Then there’s the cappuccino ( which most Italians will never drink at the end of a meal and rarely in the afternoon or evening.) The cappuccino, too, can be modified in the following ways: senza schiuma (no foam), poco schiuma (just a little foam), scuro (less milk) and thus darker or chiaro (more milk). And of course, you might also want to specify that you want it tiepido (lukewarm) or bollente (boiling hot).  And then there is the famous caffé latte, a morning drink only. But remember in Italy you have to ask for it with both words. If you ask just for a “latte” you will only get a glass of milk.

Since politically correct hasn’t sunk in here as it has in France (where apparently one can no longer order a small black coffee with the words, un petit noir, a little black), some people still ask their barista of choice to make un marocchino, a Moroccan, which is a lovely-to-look-at, swirly drink of coffee, cocoa and cream.

And then when the weather gets warmer, lots of people switch to caffé freddo something, I personally avoid because they almost always prepared it sweetened and I never take sugar or sweetener in my coffee. (One way to get around this, especially if you are at a bar where they know you, is to ask for a glass with ice in it and then get them to pour a freshly-made espresso (or two) over it. And then there is the caffé shakerato, often served in a champagne glass and which I suspect was copied from the Greeks’ marvelously refreshing summer frappé.

Many Italians, especially those without children,  like to have breakfast – prima colazione – at the corner bar or café which means accompanying their coffee (or cappuccino) with a cornetto, either plain, semplice, or ripieno, filled (with custard, chocolate, or jam). By the way, most cafés also will have a whole wheat (integrale) cornetto.

I am not a real cornetto fan, preferring muffins or French croissants to Italian pastries. But occasionally one finds something like a Danish or a good pound cake, ciambellone, although here, too, I have reservations, since the yeast used in most Italian baked goods is vanilla-flavored and I prefer our own unflavored version.

Somewhere along the line, I got into the habit of having tea when I wake up in the morning; usually a rather strong, smoky black tea called Lapsong Souchong which provides me with an initial wake-up shot of caffeine as soon as I’ve gotten out of bed. But after a while I need something a bit more to get me going – to carburare as the Italians would say – and so once I’ve gotten dressed and checked my e-mails I’m ready to go downstairs and get my first espresso of the day. I’m a coffee addict, so that is really only the first of several.

No Comments on At the “bar”: Il caffé -The many forms (and tastes) of coffee in Italy

Any comments? We’d love to hear them! Cancel reply

« Tipping in Italy. Or not.
Il barista italiano: a national resource »
We use cookies on our website to give you the most relevant experience by remembering your preferences and repeat visits. By clicking “Accept”, you consent to the use of ALL the cookies.
Cookie settingsACCEPT
Manage consent

This website uses cookies to improve your experience while you navigate through the website. Out of these, the cookies that are categorized as necessary are stored on your browser as they are essential for the working of basic functionalities of the website. We also use third-party cookies that help us analyze and understand how you use this website. These cookies will be stored in your browser only with your consent. You also have the option to opt-out of these cookies. But opting out of some of these cookies may affect your browsing experience.
Necessary Always Enabled

Performance cookies are used to understand and analyze the key performance indexes of the website which helps in delivering a better user experience for the visitors.

Analytical cookies are used to understand how visitors interact with the website. These cookies help provide information on metrics the number of visitors, bounce rate, traffic source, etc.

Advertisement cookies are used to provide visitors with relevant ads and marketing campaigns. These cookies track visitors across websites and collect information to provide customized ads.

Other uncategorized cookies are those that are being analyzed and have not been classified into a category as yet.