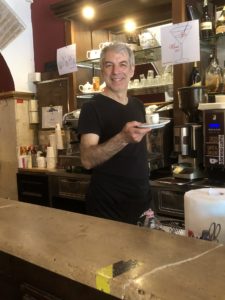 This was the title of a story I wrote a few years back for the Rome daily, Il Messaggero, and from the feedback I had I am inclined to believe that every barista in Rome thought I was writing about him (yes, there are women bariste but they are still a minority).

If you are – like me – someone used to having her first coffee of the day outside the house, the barista’s attitude can have a significant impact on the rest of your day and therefore anyone sulking or in a bad mood is definitely to be avoided.

You want someone who greets you warmly with a smile and hopefully with your name. In Rome, you also want a barista who is good at the making the sarcastic jibes that Romans are known for. (Luigi, a former actor, is originally from Puglia but he has been in Rome long enough to blend in!) And you want him to be able to tell when you are not in a good mood and, in short, to care (or at least to appear to do so!).

Most importantly, along with his good humor, you want to have one of those incredibly savvy baristi (or bariste) who seem to be able to remember what everyone’s favorite brew is. So often you don’t even have to order. In my case, as I walk inside, they usually ask me “americano o lungo”?  because I vary between the two depending on 1) what time it is and 2) whether I have time to sit and nurse an americano or if I am hurrying off to some appointment.

One of Luigi’s predecessor’s at Bar del Cinque in Vicolo del Cinque in Trastevere,  the mythical Giancarlo, now retired, often had my caffè lungo waiting for me on the counter because he could see me from his window as I walked the 100 meters from my building.  And what about the time when I was sipping my coffee that he asked “how is it you are here today? It’s Friday. Aren’t you supposed to be at the hairdresser????”

But, of course, he was not totally unique. An American girlfriend who had moved back to New York after years in Rome came back for a visit two years later and stopped by the caffé in Via dei Giubbonari (down the road from Campo de’ Fiori) where she always used to have her morning coffee. As I said, two years had gone by. But when she walked in the barman did not miss a beat. “Buongiorno Signorina, Your usual cappuccino?”

No Comments on Il barista italiano: a national resource

Any comments? We’d love to hear them! Cancel reply

« At the “bar”: Il caffé -The many forms (and tastes) of coffee in Italy
To Ciao or not to Ciao »
We use cookies on our website to give you the most relevant experience by remembering your preferences and repeat visits. By clicking “Accept”, you consent to the use of ALL the cookies.
Cookie settingsACCEPT
Manage consent

This website uses cookies to improve your experience while you navigate through the website. Out of these, the cookies that are categorized as necessary are stored on your browser as they are essential for the working of basic functionalities of the website. We also use third-party cookies that help us analyze and understand how you use this website. These cookies will be stored in your browser only with your consent. You also have the option to opt-out of these cookies. But opting out of some of these cookies may affect your browsing experience.
Necessary Always Enabled

Performance cookies are used to understand and analyze the key performance indexes of the website which helps in delivering a better user experience for the visitors.

Analytical cookies are used to understand how visitors interact with the website. These cookies help provide information on metrics the number of visitors, bounce rate, traffic source, etc.

Advertisement cookies are used to provide visitors with relevant ads and marketing campaigns. These cookies track visitors across websites and collect information to provide customized ads.

Other uncategorized cookies are those that are being analyzed and have not been classified into a category as yet.